While food insecurity is more prevalent in some parts of the country, the reality is that it exists in all communities. According to the US Department of Agriculture, nearly 40 million people face hunger in the U.S., including an estimated 1.6 million individuals in Ohio.

Walmart is deeply committed to fighting hunger and, as part of its efforts, collaborates with Feeding America®, the nation’s largest domestic hunger-relief organization, year-round to support their network of 200-member food banks and 60,000 food pantries and meal programs nationwide.

This year, through the retailer’s spring “Fight Hunger. Spark Change.” campaign, Walmart and Sam’s Club customers and associates raised more than $1.1 million for Ohio food banks, helping them provide healthy, nutritious meals to individuals and families struggling to get enough to eat.

“Thanks to the generosity and support of our customers, associates and suppliers, we are raising awareness about food insecurity in Ohio and taking action to be a part of the solution,” said Dann Moore, Walmart regional general manager for northwestern, central and southern Ohio. “We applaud our local food banks for the work they do every day to fight hunger in our communities.”

“Every day, Feeding America member food banks see the impact that hunger has on children, families, seniors and communities. We encourage everyone to find their local food bank and take action to help end hunger,” said Claire Babineaux-Fontenot, CEO of Feeding America. “Community support is essential to helping our neighbors in need and we are tremendously grateful to Walmart, Sam’s Club and their dedicated suppliers, associates and customers for their commitment to helping people who struggle to put food on their tables.”

Hunger can affect individuals from all walks of life, but some populations are more at risk. In Ohio, children are one of the most vulnerable groups to food insecurity. According to Feeding America, hungry children are more likely to be hospitalized and face higher risks of health conditions like anemia and asthma. As they grow up, kids struggling to get enough to eat are more likely to have problems in school and other social situations. 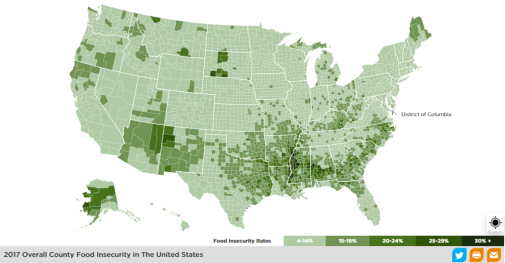