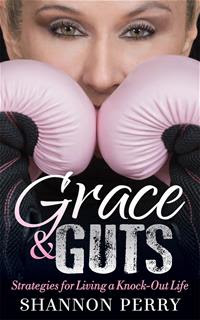 For Immediate Release (Houston, TX) —  The death of a 13-year-old boy in Moreno Valley, California from a bullying incident has sparked further outcry by parents across the country who are demanding schools offer better protection for their children. A recent study showed that 49% of children in grades 4-12 reported being bullied by other students at least once during the past month. Only 20-30% of students who have been bullied notify adults. During October’s National Bullying Prevention Month, author,  speaker and counselor Shannon Perry is offering a free resource for parents and children from her award-winning book “Stand.” Perry, who created an anti-bullying programs for one of the largest public school systems in the U.S. during her time as an educator, wrote a chapter in the book specifically on bullying and how to keep from becoming a victim. She also tackles the subject of adult bullying in her new book, “Grace and Guts: Strategies for Living a Knock-out Life.”“Bullying is something I have fought against for many years,” says Perry. “I have personally experienced bullying as a child and as an adult so it is something that I know first-hand. Bullying has become an epidemic, not only among students, but in the workplace as well. A bully is someone who thrives on power and control. Parents and students need to know specific counter measures that can dissuade bullies from acting out. That’s what this chapter in ‘Stand’ outlines.”

Perry offers some practical suggestions for standing up to a bully, whether at school or in the workplace.

“We teach people how to treat us,” says Perry. “When you confront a bully, we need to do so with confidence, assurance and in a calm way. If we lose our composure or get angry or cry, they will view that as weakness, which just feeds their behavior. One particular trick I learned was just to agree with a bully; it totally throws them off! For example, if a bully calls you fat just say, ‘You know, I have gained a few pounds lately, thanks for your concern.’ They don’t know how to respond to agreement.”

Perry says there are typically three parts to any bullying situation.

“There are three roles that play out in every circumstance: the bully, the bullied, and the bystander,” says Perry. “If you see someone being bullied, you have the power to bring that situation to an end.  We need to drop the excuses that we make for not getting involved and be brave enough and loving enough to take a stand.  And if parents are made aware that their child is being bullied, they need to go to the highest authority in the school until something is done about it.”

Though it has been nearly five years since releasing her last award-winning book for teen girls, “Stand: Staying Balanced with Answers for Real Teen Life,” Perry never meant to take a hiatus from writing. During the past few years, Perry saw her mother diagnosed with cancer, which she subsequently passed away from in 2017. While her mother was fighting for her life, her father was also diagnosed with cancer, requiring immediate surgery. In the midst of her caretaker role as an only child, Perry continued to speak at conferences and events across the country where she asked women of all ages to describe the most difficult challenges they face on a daily basis. She identified twelve issues that were consistent: overcoming fear, people-pleasing, facing uncertainty, mastering anger, exhaustion, betrayal, insecurity, depression, loneliness, finding purpose, addiction, and dealing with difficult people. Perry says writing “Grace and Guts” was cathartic in many ways as she faced her own challenges over the past five years.

“The book cover of me wearing boxing gloves says it all,” says Perry. “Life can often feel like a boxing ring and, in the last few years, I have felt as if I was often fighting for my sanity, my peace and my own sense of purpose. We all have had personal battles with one of these twelve core issues.   I hope that this book offers people tools that will help them gain victory over the things that hold them back from living life to its fullest.”

To download the free “Dealing with Bullies” chapter, visit www.ShannonPerry.com.

Shannon Perry hosts a weekly TV show, Grace in High Heels, which airs on five television networks into over 100 million homes. She is the author of four books, earned a Master’s degree in Education and Counseling, and is a Certified Instructor in Parenting Classes and Crisis Counseling. Her articles have appeared in Focus on the Family magazine, Brio magazine, Charisma magazine, Crosswalk.com, among many others. As a singer and songwriter, Perry has teamed with Lifeway’s Songwriter of the Year, Paul Marino, to write and record songs for one full-length CD as well as the song, “Overlooked,” featured on Perry’s latest CD, In Her Shoes. The music video for “Overlooked” was directed by Telly Award-winning filmmaker Jeff Kubach whose credits include the hit television shows Survivor and Burn Notice. Perry has performed with the Houston Symphony, at Carnegie Hall, and sang the National Anthem at a Houston Astros game and Houston Texans NFL game before 70,000 fans.