Although drunk driving fatalities in the United States have been reduced by nearly 50% since the early 1980s, thanks to harsher penalties for DUI’s and the work of awareness groups like MADD, alcohol-impaired driving remains a serious problem on America’s roadways.

In 2018, 29% of total motor vehicle fatalities were a result of alcohol impairment, wherein an operator of a vehicle involved in the crash had a blood alcohol concentration of .08 or greater. The good news is that this is the lowest percentage of alcohol-related fatalities since the NHTSA began reporting alcohol data in 1982. However, the rate is much higher in some states compared to others.

To give you a full picture of the current drunk driving situation in the U.S., we used the latest FBI arrest figures, National Highway Traffic Safety Administration statistics on fatal motor vehicle crashes, and U.S. Census data to rank all 50 states based on the severity of their DUI problem. 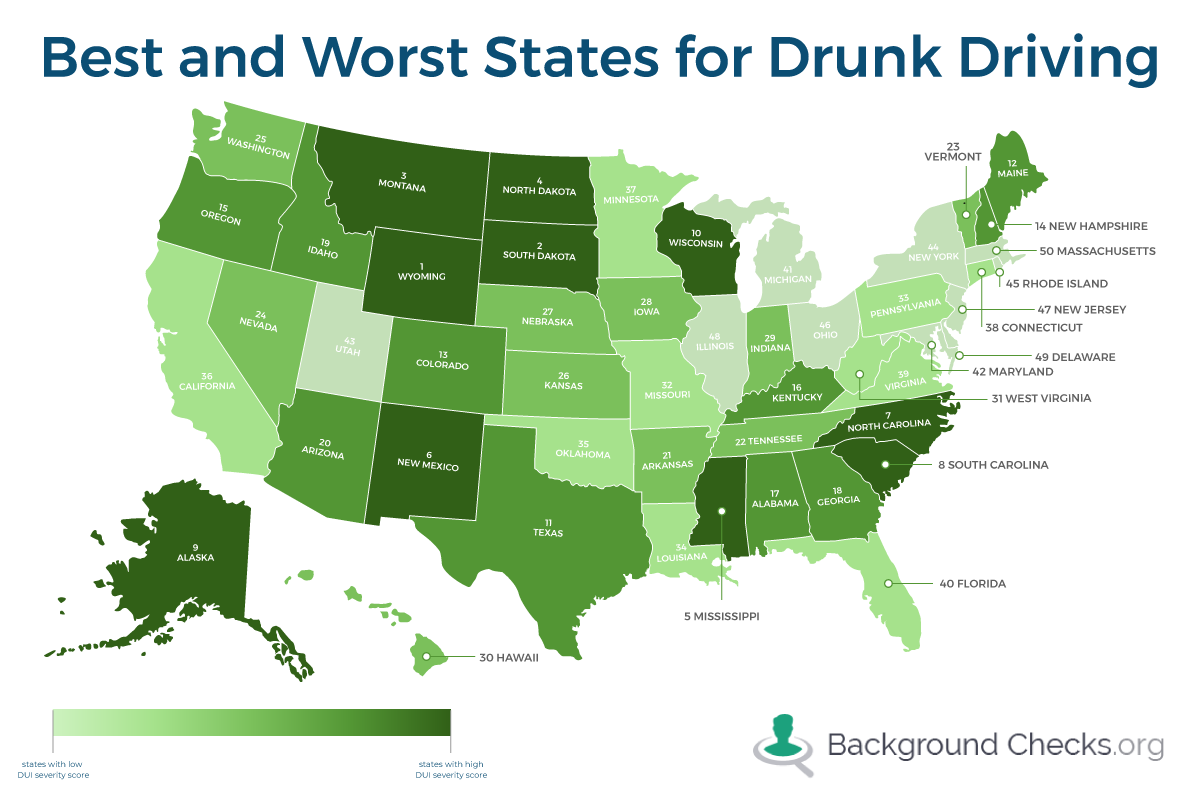 States with the Worst DUI Problems

Overall, when looking at the decrease in drunk driving fatalities and arrests in the United States over time, the situation is promising. As we mentioned in the intro, 2018 witnessed the lowest percentage of alcohol-related motor vehicle fatalities since data began to be compiled on the subject, and 2018 saw a 3.6% drop over the prior year. Promisingly, two of the worst states for drunk driving, North Dakota and Wyoming, had two of the most significant decreases in alcohol-related motor vehicle fatalities (ND = -38.30%, Wyoming = 26.10%).

We still have a long way to go: thousands lose their lives each year in alcohol-related fatalities, which in turn profoundly affects the lives of families across the country, but when it comes to drinking and driving in the U.S., the outlook is a positive one.

In order to rank the states by the severity of their DUI problem, the DUI severity score was calculated using DUI arrest rates per 100K and DUI fatalities per 100K. Rates per 100K were calculated using the latest 2018 FBI Arrest statistics for DUI arrests, and National Highway Traffic Safety Administration statistics for DUI fatalities. Due to the fact that the FBI arrest data was incomplete and not covering a state’s entire population in some cases, the population figure posted by the FBI was used to calculate the DUI arrest rate per 100 for all 50 states. To calculate the DUI fatality rate per 100K, the latest census population data was used. Note: 2018 Iowa arrest data was not available so data from the 2017 FBI report was used in its place.