About 25% of Ohioans with confirmed COVID-19 cases have been hospitalized in the two weeks since officials detected the disease in the state, a concerning sign as health experts warn of an overload on the state’s hospitals.

Data released Tuesday afternoon show 145 people have been hospitalized due to the new coronavirus, or about 26% of the 564 confirmed cases in Ohio.

Of those hospitalized, 62 people have required care in the ICU. 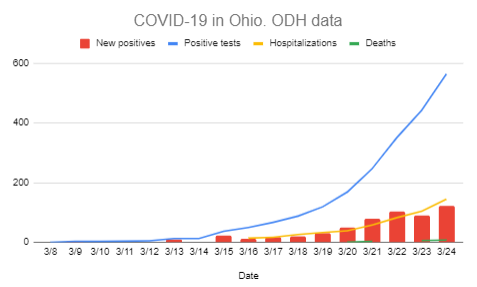 The data is limited. Due to low supply, testing is prioritized for the elderly and immunocompromised — populations especially vulnerable to the disease.

Testing is also reserved for health care workers, 91 of whom comprise 16% of Ohio’s infected population.

Department of Health Director Dr. Amy Acton has repeatedly warned positive test results are just “the tip of the iceberg” as to Ohio’s full infected population.

While she cautioned Tuesday that Ohio has a limited amount of data to draw conclusions from, she said the state may be following trajectories of hotspots like Italy and Washington state.

“I think that hospitalization rate is good enough for me to know that we’re on the same trajectory and we need to start preparing our hospital capacity now,” she said.

In Italy, doctors are making decisions of which infected patients can access the limited hospital beds and ventilators available, and which ones die without.

“If a patient has a low likelihood to benefit from the hospital, we have to not accept them. You send them home. This is also what I am seeing every day,” Dr. Marco Metra, the chief of cardiology at the University and City Hospitals in Brescia, told The New York Times.

As of 10 p.m. Tuesday, nearly 55,000 people in the U.S. have tested positive for the disease since it was first detected in late January. According to data from Johns Hopkins University, 780 have died.

On social media, DeWine released data showing about 40% of the state’s ICU beds are currently vacant. Acton has also stated concerns about shortages of personal protective equipment for care providers like gloves and masks 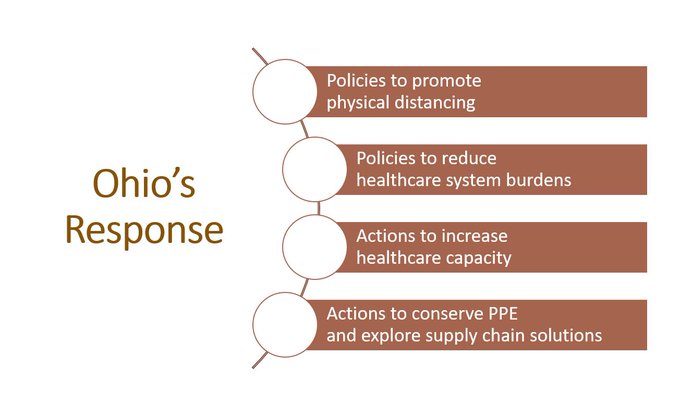 We are about 60% capacity in hospitals after elective surgeries stopping. The bottom line is that it’s about ICU bed capacity. We are trying to keep those who can be routinely cared for in lesser care settings and turning our hospitals into expanded ICU settings. 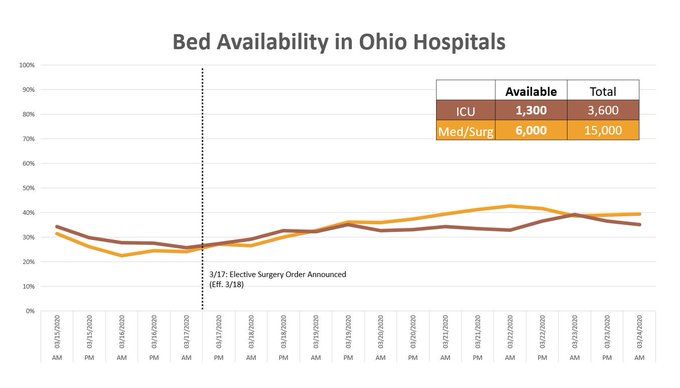 83 people are talking about this

Last week, Acton said modeling ODH is using predicts between 40% and 70% of Ohioans will be infected over the next 12 months — a staggering shock for a health care system to absorb.

As more states are imposing stay-at-home orders, President Donald Trump spoke out Tuesday about the need to have the country “opened up” by Easter to pull the economy out from a downward pitch.

While Gov. Mike DeWine downplayed the contrast between him and the president, he offered the opposite counsel. He insisted an unhealthy populace will foster an unhealthy economy, and people need to stay separated to slow down the virus’ spread.

“Leaving our hospital system, our health care system in shambles, is not the way to grow our economy,” he said.

Acton floated different ideas in the works at Tuesday’s daily press briefing, including converting dormitories and hotels into hospitals. This coupled with the cancellation of nonessential medical procedures and asking businesses to provide any personal protective equipment, she said are means to help hospitals prepare.

Research published last week by the CDC analyzed 4,226 data from cases of American COVID-19 patients. About 18% of those cases required hospitalization (1,514 cases did not offer hospitalization status).

For information on COVID-19 in Ohio and copies of all public health orders, you can visit the state’s coronavirus website here.

For information on how to avoid the virus, what symptoms are like and what to do if you think you’re infected, you can go to the CDC’s COVID-19 page here.