Federal data shows Ohioans made a run on gun stores in March as COVID-19 caseloads in the state exponentially grew.

It was Ohio’s second busiest month for gun sales for as long as data has been available since 1998. Sales hit their peak in Ohio in December 2015, after 14 people were killed in a terrorist attack in San Bernardino, California.

In March, at least 114,086 people bought guns in Ohio, as measured by background checks initiated through the National Instant Criminal Background Check System (NICS). The FBI records the data monthly on a state-by-state basis.

The data could be an undercount, as Ohio does not require background checks for private gun sales. 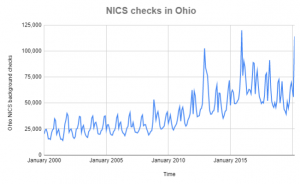 Ohio followed a national trend of surging firearms demand. Americans bought about two million guns in March, according to The New York Times, the second-busiest month for gun sales since January 2013, after a mass shooting at Sandy Hook Elementary School.

Although Ohio Department of Health Director Dr. Amy Acton issued a stay-at-home order, effectively closing all non-essential businesses in the state, the order considers firearm and ammunition suppliers to be essential.

At least 2,902 people in Ohio have been diagnosed with COVID-19, the disease caused by the novel coronavirus. At least 802 of them have been hospitalized, 260 of whom have required ICU care. Eighty one people have died. 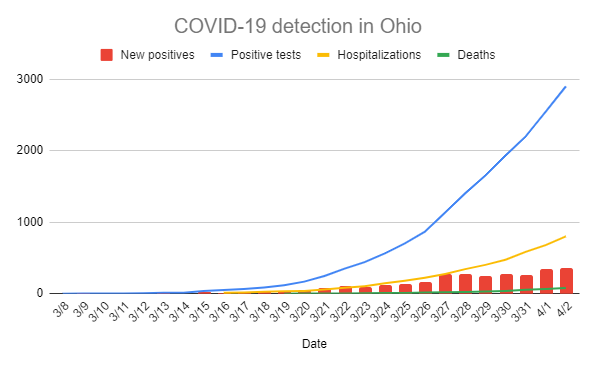