A group of Ohio lawmakers heard one breathtaking statistic after another: of restaurants closing for good, of hotels having record low occupancy, of a logjam of Ohioans being forced to seek out unemployment benefits after having lost their jobs.

Hearing all that, several Republican members of the Ohio House Economic Recovery Task Force focused their attention this week on the unemployment benefits — specifically, getting Ohioans off of them.

Republican State Rep. Jon Cross of Kenton shared this worry: “The concern we have is the federal and state government’s tossing money around left and right. How do we get people back to work and off these programs when they’re only supposed to be temporary?”

Close to 700,000 Ohioans have filed for unemployment over the past month due to the coronavirus-related economic shutdown. Fears have been expressed about reopening the economy too early, which could lead to a resurgence of the virus that has killed hundreds of Ohioans and infected thousands of others.

Republican Rep. Dave Greenspan of Westlake had a similar take as Cross. Would unemployment benefits, he wondered on Tuesday, become an “impediment” to getting the economy running smoothly again?

That question was posed to Joe Savarise, executive director of the Ohio Hotel & Lodging Association. Savarise had just finished speaking about the 30,000 hotel jobs lost in Ohio, along with the loss of tens of thousands of hotel-supported jobs such as landscapers and contractors. He’d noted that a significant number of licensed hotels in Ohio were set to close or had already closed.

“This is going to be the worst year for hotel occupancy on record, ever,” Savarise said.

Minutes later, when the topic of discussion changed to getting Ohioans off of unemployment benefits, Savarise quickly changed his tune. Suddenly there were unnamed hotels who were already on the rebound and had tried to bring “certain people back,” Savarise claimed. They were apparently unsuccessful because the former workers, he alleged, preferred to stay on unemployment:

John Barker, president and CEO of the Ohio Restaurant Association, made similar comments.

He had offered a staggering snapshot of the state’s restaurant industry: that half of the 23,000 eateries in Ohio are closed, and more than 10% of them may never reopen. The shutdown has affected hundreds of thousands of workers, Barker continued, with the need so great that his organization has set up a relief fund to assist workers.

When Democratic Rep. Jack Cera of Bellaire asked Barker about widening the eligibility of unemployment benefits to help out those restaurant workers, Barker gave his support.

Then, like Savarise had, Barker turned his attention to the “problem” of unemployment benefits, relaying fears that Ohio employees might “refuse” to go back to work:

“If you’re able to work,” Barker said, “and your company is offering you employment, if you refuse it because you’re making more money on unemployment than you would be working, that support needs to be pulled. That’s the only way to get people back to work.”

Ohio legislators were not much involved in the state’s various shutdown orders as a response to COVID-19. Those decisions were enacted by Gov. Mike DeWine and Ohio Dept. of Health Director Dr. Amy Acton.

Now working from home and hearing from anxious constituents in their districts, lawmakers are seeking to be part of the dialogue in getting the economy reopened. This led to Speaker of the House Larry Householder forming his chamber’s Economic Recovery Task Force, made up of 17 Republicans and seven Democrats.

The group met three consecutive days to open this week, listening via internet conference call to health care professionals and business leaders speak about how the shutdown has affected their respective industries.

Invited guests have also used their time to encourage support for various policy proposals that would benefit their line of work. In one such example, the head of a nonprofit rehabilitation network advocated lawmakers support a proposed bill to require commercial insurances cover telehealth services.

Guests earlier in the week primarily called for Ohio to reopen businesses and health care services as quickly as is safely possible. They lamented the effects of the virus and resulting shutdown, but also expressed they understood the necessity of DeWine’s actions for the sake of public health.

By Wednesday, with the guest list transitioning from industry leaders to the business owners themselves, that understanding had begun to blur. That day’s guests were the most directly critical of DeWine and Acton yet.

Task Force Chairman Paul Zeltwanger, R-Mason, introduced a restaurant owner from his district to lead off the meeting.

“I mean no disrespect,” Dale Hipsley began, “but Gov. DeWine and Dr. Acton have done a masterful job of scaring the dickens of people … the conveyance of abject fear needs to stop.”

Hipsley said entrepreneurs “are about to lose everything” and that businesses like his should be allowed to reopen immediately.

He was followed by Jason Duff, a small business developer from Bellefontaine, who argued that control of the reopening process should belong to local communities rather than the state government. Duff proposed letting businesses in rural communities with “low case counts” reopen as tests for a broader return to normal.

Zeltwanger asked Duff if those businesses in his area would be able to reopen as soon as this week. Duff answered that it might take some more time, as there are fears about the virus shared in the media and on social media causing a wider impact on Ohioans’ mental health and well-being.

“When we’re armed with intelligent, well-thought out data and information, we can make educated and smart decisions,” Duff said, offering a proposed reopening date of May 1.

Democratic Rep. Terrence Upchurch of Cleveland, whose home county has more than 1,200 confirmed cases to date, pushed back on that timeline.

“Even if it is May 1st, there is still a possibility that this virus can still be rampant,” Upchurch said. “So if we hit the May 1st deadline and things go back to what they were prior to the shutdowns, and let’s just say you have a customer who happens to get infected or happens to get sick after entering your establishment, should a business owner be liable?”

“These are risks that we are going to have to face,” Duff answered.

Duff then said that public health would actually suffer more by not reopening businesses in a swift manner:

Later on Wednesday, DeWine said at his daily press conference that he wants business leaders to begin formulating a plan of how they could safely operate once the shutdown orders are relaxed:

I also asked each industry in the state to start putting their plans together in regard to how they would protect employees and customers when they are allowed to open up. I’ve asked @LtGovHusted to lead this effort.

194 people are talking about this

DeWine said he wanted to learn from businesses that have remained open during this crisis to better understand best practices for the greater economy.

Between Monday and Wednesday, members of the Economic Recovery Task Force heard from 17 invited guests — all of whom are men. The group is welcoming other small business owners to share their stories in an upcoming virtual meeting:

As part of the OHIO 2020 Economic Recovery Task Force, we are seeking small businesses from across Ohio who would be willing to share their story with the task force in virtual testimony. Please email us at Ohio2020@ohiohouse.gov @OHTaskForce2020 #InThisTogether #Ohio 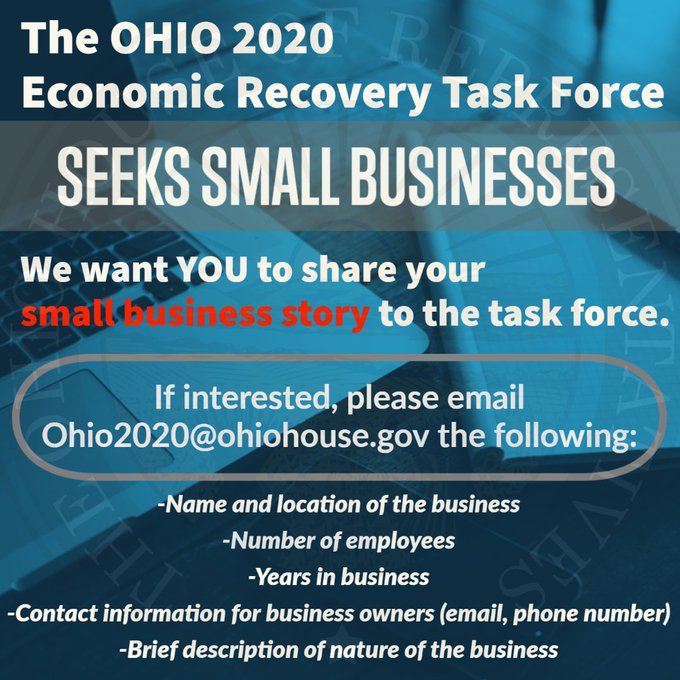