State health officials are detecting COVID-19 cases at an increasing pace, as Gov. Mike DeWine is set to begin a phased-in reopening of the economy beginning May 1.

After a slow start in early April, officials have reported increasing amounts of new cases for the last six days in a row, five of them setting high watermarks for most cases reported in a 24-hour period.

Six days in a row of increasing case counts 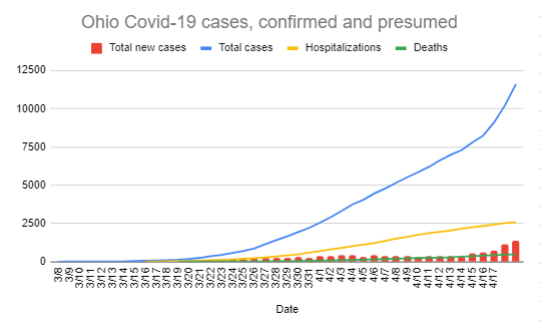 58 people are talking about this

On Sunday, the Ohio Department of Health reported more than 11,600 confirmed and probable cases in Ohio – 1,380 of them were reported since Saturday afternoon.

At least 471 Ohioans have died from confirmed and probable cases. More than 2,500 have been hospitalized.

At Marion Correctional Institution, a whopping 1,828 inmates inside have tested positive, along with 109 workers, as of Saturday. There are about 2,500 total inmates inside, as of March.

An Ohio prisons spokeswoman did not respond for comment.

In nursing homes, The Columbus Dispatch reported at least 826 residents were infected as of Thursday. Almost 90 were dead.

Since releasing the nursing home cases on its website Thursday, the state Department of Health has stopped listing cases associated with nursing homes.

“We took it down because we had several inaccuracies,” said Melanie Amato, an ODH spokeswoman. “Once we verify the information we will put it back up.”

Another troubling trend: black people represent 21% of the total infected population, despite comprising 13% of the general population. However, race is unknown in 21% of cases.

Grzegorz Rempala, a researcher at Ohio State University’s infectious Disease Institute, led a research team that built a model to predict the spread of the virus. He said he hasn’t seen anything to believe the outbreak is picking up.

He said an expanded case definition (the CDC now recommends counting “probable” cases that have not been confirmed via lab testing), as well as increasing testing in closed communities like prisons, may be making for the appearance of growth but not any real acceleration.

“We very well may be seeing combined effects of those factors as increases in daily counts,” he said in an email. “I would not be concerned as long as we do not see an increase of hospital admissions.”

Indeed, hospitalizations from COVID-19 have been on the downturn. Sunday’s data reported 20 new hospitalizations. In early April, as many as 120 people on average would be hospitalized per day.

William Miller, an epidemiologist at OSU, said he’s puzzled by the new data, but expects that new testing is skewing the numbers.

“The steadiness of the hospitalizations and ICU suggest to me that there is a disconnect between the test numbers in the past few days and the hospitalizations,” he said. “Now, it is possible that we’ll see some surge in a few days but I think we’d have seen some indication of that.”

For an economy to re-open in any serious way, experts agree on a need for more widespread testing. About 3,000 Ohioans per day have been tested since April 1.

“I don’t have a number that I can give you,” Miller said when asked what kind of testing capacity would be needed to open the economy.

“But I would say that we’ll need more than that. We’ll have a lot of testing of people who have been exposed, in addition to those that are ill. All of the contact tracing to identify cases, and isolate them, and to identify exposed people to put under surveillance will depend heavily on testing.”

On Sunday morning, DeWine said in a televised NBC interview he wants the Food and Drug Administration to approve a new technology that he says could double or triple the testing threshold “virtually overnight.”

He later said on social media he had a “very positive” phone call with the FDA regarding comments made in the interview.

I was happy to get a very positive phone call just a short time ago from @US_FDA regarding my comments this morning on @MeetThePress. Watch below.

WATCH: Ohio Gov. Mike DeWine (R) says “I could probably double, maybe even triple testing in Ohio virtually overnight” with help from the FDA.@GovMikeDeWine: “We really need help. [If] anybody in the FDA is watching, this would really take our capacity up literally overnight.” 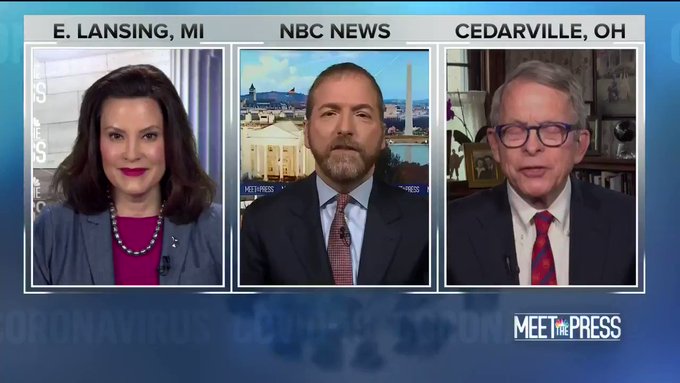 497 people are talking about this