This past week we’ve seen Americans at a fever pitch over stay-at-home orders imposed to save lives during the coronavirus pandemic. We’ve seen men armed with semi-automatic rifles in militia cosplay storm the Michigan Statehouse, screaming in the faces of the police officers preventing them from entering the Michigan House of Representatives.

We’ve seen unhinged citizens harassing reporters on the steps of the Ohio Statehouse with wild accusations. We’ve seen protesters gather at the private home of Ohio Department of Health Director Dr. Amy Acton, some reportedly armed. We’ve seen a dollar store security guard shot in the head reportedly for telling someone they weren’t allowed to be in the store without a mask.

One element that’s hard to escape from watching the small groups of protesters target Acton in Ohio and Michigan Gov. Gretchen Whitmer is that they have directed their ire at female leaders as opposed to Gov. Mike DeWine or Michigan Department of Health Director Robert Gordon. This point was noted by Toledo Blade reporter Liz Skalka:

In Ohio, shutdown vitriol is directed toward Acton, not DeWine or Husted.

In Michigan, it’s directed toward Whitmer.

A small group of protestors have gathered in front of the central Ohio home of Dr Amy Acton. Neighbors report several men walking up and down the street with assault weapons stating that there will be no violence. “For now”
#ohio #amyacton #thisisamerica #asseenincbus 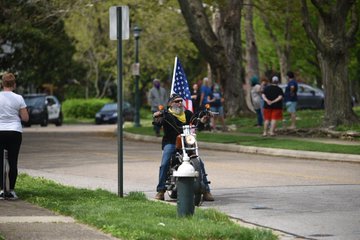 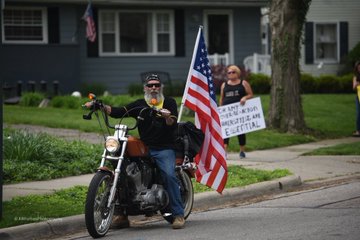 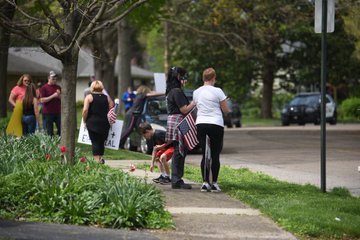 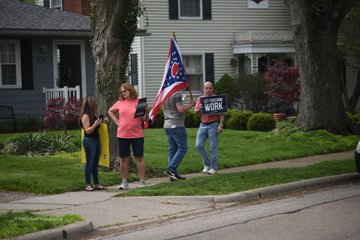 905 people are talking about this

Also hard to escape are the blatant displays of anti-Semitism repeatedly popping up at these protests in Ohio and elsewhere. These protesters also seem prone to displaying the Confederate flag, flying the colors of treason and slavery in Michigan and Kentucky, both Union states.

As though misogyny, anti-Semitism, and waving the flag of racism and treason weren’t enough, we’ve also seen the anti-vaccination crowd growing in influence at these protests. Aggression toward law enforcement has been on display as well:

This was Sacramento yesterday. These groups of extremists, who are often armed white men, are distracting police, threatening lawmakers and public health officials, and fomenting racism – all during a public health crisis. 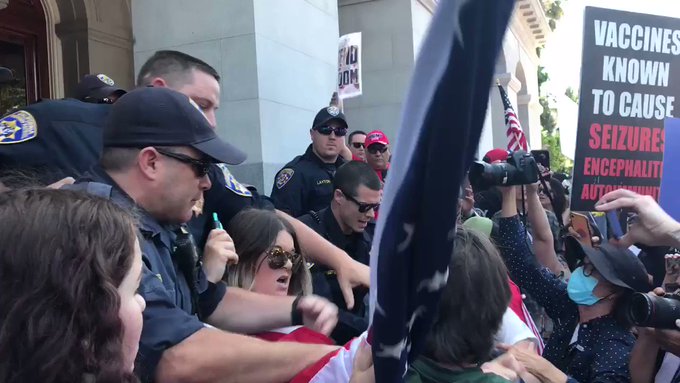 3,997 people are talking about this

One of the key things to keep in mind while viewing this disturbed set of loud, angry people is that they still represent an extremist minority.

A Morning Consult poll put out Monday morning shows that fewer than 1 in 5 Americans are currently comfortable doing everyday activities. Of course, there is a partisan divide, with 27% of GOP adults responding they would go out to eat today vs. 10% of Democrats. Still, according to the survey, most Republicans said they were “very uncomfortable” reentering a variety of public spaces, such as movie theaters, amusement parks, and political rallies.

A NPR/PBS Newshour/Marist poll (conducted April 21 through April 26) showed 80% said they do not want schools, restaurants, or large sporting events to start taking place again until there is more testing, and 65% said they do not want to go back to work without more thorough testing. Of course, there were again stark partisan divides, with independents siding largely with Democrats.

None of this should be very surprising: that a very vocal extremist, reactionary minority is pushing hard for a total reopen, spitting venom, waving flags of hatred and intolerance, and peddling anti-science crankery.

What’s disturbing is the deeply irresponsible abdication of duty from Republican politicians stoking these groups. Of course this includes President Donald Trump and his infamous “LIBERATE” tweets against Democratic governors as these protests began cropping up.

But local elected officials in Ohio and elsewhere have also been reckless and irresponsible. In Michigan, one state senator ended up apologizing for wearing a Confederate flag face mask after initially defending it.

Meanwhile, there’s Republican state Rep. Nino Vitale of Urbana, who has questioned whether Bill Gates created the new coronavirus, referred to Acton as a globalist, sworn he won’t wear a mask because faces are the “likeness of God,” and encouraged Ohioans to defy the stay-at-home order.

Vitale been downplaying the virus for weeks. Among examples are him appearing at the Statehouse protest; saying the @OHdeptofhealth statistics were “guesswork” ; & cited an opinion column as medical fact, presenting it to @OHTaskForce2020 as a news story.https://twitter.com/Tylerjoelb/status/1251635519735373829 …

Reminder that Rep. Vitale said last week the @OHdeptofhealth was only “guessing” when it reports COVID-19 statistics: 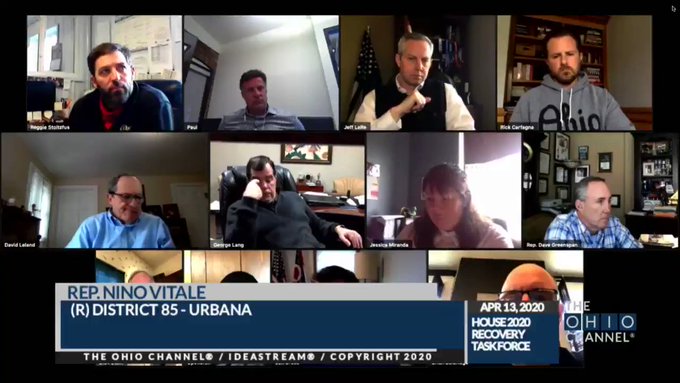 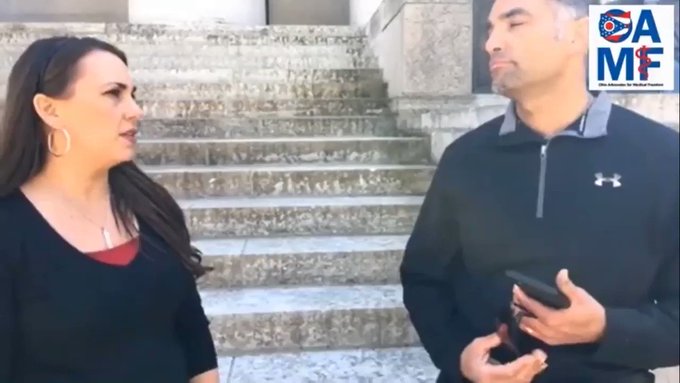 25 people are talking about this

State Rep. John Becker, R-Union Twp., is proposing legislation that would reopen Ohio “without delay” and revoke the authority used by the DeWine administration in responding to COVID-19.

State Rep. Paul Zeltwanger, R-Mason, is the chairman of the Economic Recovery Task Force and has presided over a committee that has played host to conspiracy theories, general downplaying of the seriousness of COVID-19, and allegations the governor shuttered the state economy as part of a political plot against Trump.

On Monday, state Rep. Jon Cross of Kenton speculated the coronavirus is China conducting biological warfare on the United States. 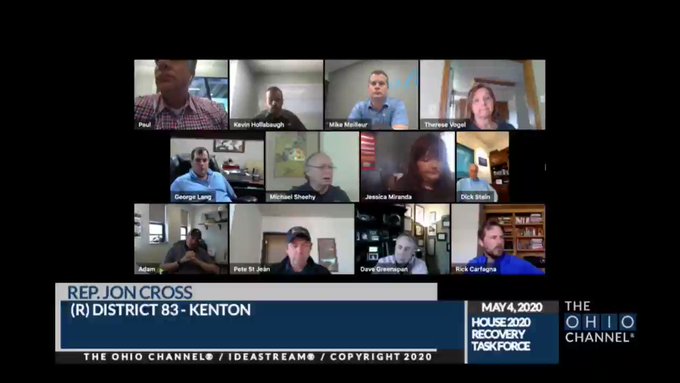 77 people are talking about this

Making all of this worse, on Monday The New York Times reported the Trump administration projects about 3,000 daily deaths by early June as states reopen.

Keeping that number down as we reopen is dependent on our collective actions going forward.

Ohio Lt. Gov. Jon Husted even said Monday that Ohio’s restart plan relies on Ohioans doing the right things to stay safe and keep each other safe, but these Ohio lawmakers are encouraging recklessness, vowing to flout their civic duty and advising others to do the same.

David C. DeWitt is an award-winning journalist with over 15 years experience covering Ohio politics and policy. He has worked for the National Journal, The New York Observer, The Athens NEWS and Plunderbund.com covering topics such as education, health care, crime and courts, poverty, government, business, labor, energy, environment and social issues. His work has also appeared in Government Executive, the Columbus Dispatch, Girlfriends magazine, Bleacher Report and the Ashtabula Star Beacon, among others. Read more Ohio Capital Journal stories here.