There is plenty that Ohio leaders and voting advocates agree on when it comes to forming a plan for the November general election.

Ohio Secretary of State Frank LaRose and voter rights groups agree, for example, that absentee ballot requests should be available on the internet instead of just through the mail. They also agree counties should offer more than one early voting location, should in-person voting even be allowed come this fall.

Those voices are advocating for an agreeable, bipartisan election plan, but it will ultimately be decided by the Ohio legislature. The two chambers returned to the Statehouse last week but have not taken any action on the subject.

However, one particular suggestion from Democrats has spurred some disagreement, with LaRose accusing proponents of trying to legalize opportunities for voter fraud.

The proposal in question was made in a letter signed by a few legislators as well as Democratic mayors of Columbus, Cincinnati, Toledo, Dayton and Chillicothe, along with other leaders throughout the state. It involves the way absentee ballots can be returned to a county’s board of elections. Voters have an option to mail their ballots back, or they can be dropped off to the elections office.

Under current law, there are limitations on which people can legally handle someone else’s ballot. It is generally restricted to family members, though not all relatives are named in the law. For example, a grandchild is technically not allowed to deliver the completed ballot of a grandparent. Other people who may be close to a person are not allowed to handle the ballot either, from best friends to neighbors.

Under normal circumstances, with a month of early voting and a full day of in-person Election Day, such limitations do not cause much of an issue. Advocates see things differently this year as Ohioans navigate health concerns with the ongoing pandemic.

“We’re at a time when grandchildren are running errands for their grandparents, but they couldn’t drop off ballots,” said Jen Miller, the executive director of the League of Women Voters of Ohio. “We do need to open up who can drop off ballots. More than ever we have neighbors doing grocery shopping for seniors or people who are immunocompromised.”

The letter, which was sent to Gov. Mike DeWine, LaRose and the two chambers’ legislative leaders, goes even further. Its signers want the law to allow “community organizations, labor unions, and trusted helpers to deliver sealed ballots.”

That doesn’t sit well with LaRose, who accused the Democrats of wanting to “weaken Ohio’s safeguards.”

Ohio has long outlawed ballot harvesting because it creates opportunities for cheating.

Yet some Ohio Democratic leaders are calling for legalizing ballot harvesting. Election fraud is rare and we should work to keep it that way. 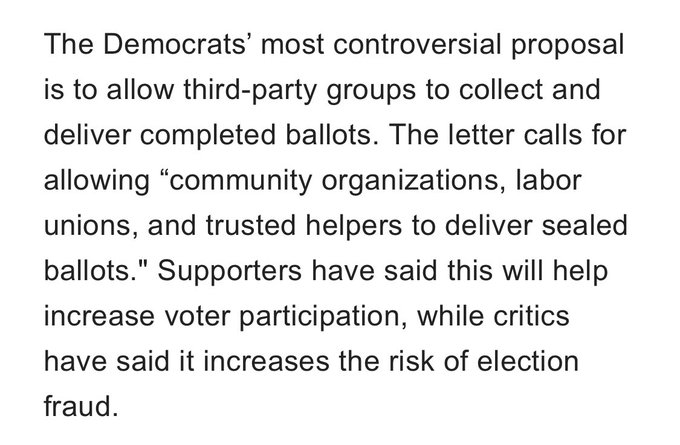 House Minority Leader Rep. Emilia Strong Sykes, D-Akron, defended the proposal and said it would include unions, churches and groups like the NAACP:

First you criticize us for voting for a bill helping Ohioans deal w/ COVID & then blame Dems when members of your own party refused to listen to you on elections.

Ohio has long outlawed ballot harvesting because it creates opportunities for cheating.

Yet some Ohio Democratic leaders are calling for legalizing ballot harvesting. Election fraud is rare and we should work to keep it that way.

Catherine Turcer, executive director of Common Cause Ohio, said the proposal also gives her pause. Her organization is among those advocating for a fair, accessible general election, but Turcer said getting groups involved with collecting and delivering ballots is a questionable idea.

The Democrats want this help to involve “sealed ballots,” but Turcer said a problem could theoretically arise if someone were to be involved with the actual casting of a ballot.

Turcer agrees with the Democrats that the rule of handling absentee ballots needs to be expanded — “but narrowly.”

Miller, with the League of Women Voters of Ohio, agrees with that view. She said the law should “open it up,” but described being “worried about wholesale organizations” getting involved.

LaRose is in agreement on the latter point of modernizing the absentee request system. He is advocating Ohio stick with its normal approach of allowing for early voting, vote-by-mail and in-person voting on Election Day.

The Ohio Voter Rights Coalition, which includes several organizations such as the one led by Turcer, has its own list of proposed reforms. The coalition too supports online requests and permitting more than one early vote center in each county. It also calls for a permanent absentee voter list, which would keep voters who wish to cast absentee ballots from having to request it each election as desired.

There will not be a “silver bullet” that fixes everything for this fall and beyond, Miller said, but there are plenty of ways to make sure all Ohioans get a chance to vote safely. She is glad, though, to see different officials presenting their ideas in public.

“I take this to mean there’s broad consensus that we do need to shore up our elections,” she said. “The question will be, what things will we get or don’t get?”

Miller would like to see the creation of an emergency elections task force made up of various stakeholders who could quickly and transparently address emergency situations as they happen.

This would prevent situations like the March primary election, which saw a scramble of confusion the day before Ohioans were set to go to the polls. The governor had sought a postponement of the election, but when a judge rejected that plan, he and Ohio Department of Health Director Dr. Amy Acton issued an emergency order to halt voting just 9 hours before polls opened.

Legislators have reason to ensure a safe, accessible general election, with many of them having their own names on the 2020 ballot. Still, Turcer pointed out, the negotiations will not be easy.

“It’s very difficult to not be partisan in an even-numbered year,” Turcer opined.

If wearing masks at the Statehouse can be partisan, “anything can be,” she said. “Especially elections.”