Democratic House Minority Leader Emilia Sykes received a call from an unknown man on May 23 calling from her father’s phone number, threatening to kill him if she didn’t “step aside” politically, according to a police report released Friday.

The suspect claimed he had her father, Democratic state Senator Vernon Sykes, captive. He told her not to contact the police.

He repeatedly told her to step aside, telling her to resign or else he would kill her father.

Emilia Sykes hung up the phone and called the number belonging to her father. Her father then answered the phone.

The report states Vernon Sykes had received a call 17 minutes before the suspect called Emilia Sykes, and that call was disconnected.

Dennis Willard, a spokesman for the Sykes family, said Friday they will continue to respect the wishes of investigators and declined comment.

He said they are taking some time together to deal with the situation.

The suspect had a southern male voice, per the report.

Though not explicitly stated by police, the threat appears to be executed via a “spoofing” attack, in which someone disguises their phone number as another’s.

Political leaders around Ohio issued statements condemning unspecified threats Tuesday, the first time the incident was made public. However, details were not made available until the Akron Police Department released a copy of an incident report Friday detailing the calls in response to a public records request.

Emilia Sykes has made headlines recently for criticizing Gov. Mike DeWine’s plans to address COVID-19’s disproportionate impact on black Ohioans. The lawmaker, a lawyer with a master’s in public health, characterized the plan as “too little too late.”

She has also been vocal in her criticisms of the House Republican majority and its recent efforts to strip the Ohio Department of Health director of some of her powers to issue public health orders.

DeWine issued a statement Tuesday. He said hatred has no place in Ohio, and violence will not be tolerated.

“I was very disturbed to learn that threats of violence were made over the weekend against Ohio House Minority Leader Emilia Sykes and State Senator Vernon Sykes,” he said. “It is wrong. It is reprehensible, and it is unconscionable to threaten someone with violence for doing the job they were elected to do.”

A spread of House Democrats issued a statement in support of the family as well.

“House Democrats stand today, as we do every day, firmly behind our Leader Emilia Strong Sykes,” they said. “Aptly named, Leader Sykes’ strength during this difficult time is admirable but not surprising to any of us who work closely with her on a regular basis. The Sykes family epitomize what it means to be a public servant and their contributions to our state deserve to be applauded, not threatened. We lift the entire Sykes family up in our thoughts and prayers today and ask other Ohioans to do the same.”

“We condemn any threats of physical harm, or any other harm, against these public servants or any other Ohioans,” they said. “Let us be absolutely clear: it is never acceptable to intimidate or threaten a public official, and it is a felony to do so. We have asked law enforcement to fully investigate this occurrence and prosecute the offenders to the fullest extent of the law.”

The threat arrived on the cusp of a turbulent week nationally and in Ohio.

The suspect called Sykes in the midst of a pandemic that has claimed the lives of more than 100,000 Americans, including more than 2,100 Ohioans.

On Monday, cell phone footage captured the death of George Floyd, a black man lying face down in Minneapolis, with a white officer using his knee to restrain Floyd’s neck. People protesting Floyd’s death, the latest in a pattern of black men dying at the hands of white police officers, turned violent around the country and at the Ohio statehouse.

WATCH: Columbus protesters targeting the Ohio Statehouse just a little bit ago. State troopers responded from inside & Columbus PD came over from the nearby street. 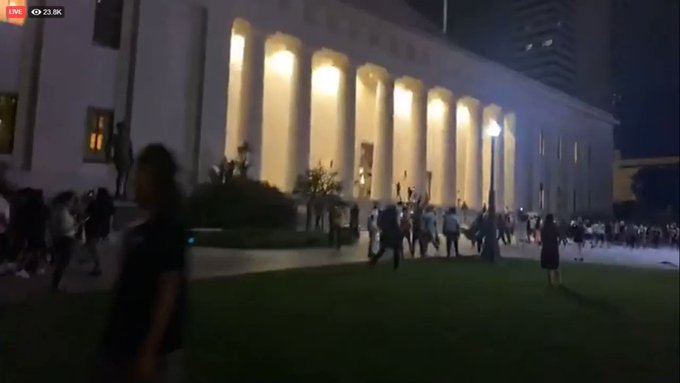 The statement warranted an extraordinary response from Twitter of flagging the tweet for violating the platform’s rules against “glorifying violence.”

Over the last several weeks, wisps of anti-Semitism have drifted up from crowds in Columbus of people protesting stay-at-home orders imposed to slow the spread of COVID-19. Some have even taken the protests to the home of Ohio Department of Health Director Dr. Amy Acton, who is Jewish.