Ohio Capital Journal staff have been out on the streets of Columbus over the weekend and into Monday, covering the protests and marches in Ohio’s capital city.

Demonstrations across Ohio come in response to the death of George Floyd, a black man who was killed during a stop from the Minneapolis police this week. Video depicts a white officer, who was later charged with murder in the third degree, pressure a face-down Floyd by the neck with his knee.

More broadly, the protests mark a boiling point of a decades-long trend of black Americans experiencing systemic racism entrenched in the criminal justice system. Protesters have chanted Floyd’s name for days now, as well as the names of other black men killed at the hands of police like Mike Brown, Eric Garner and Tamir Rice (a 12-year-old Cleveland boy).

Demonstrations were held in cities large and small. The most notable clashes came between police and protesters in Ohio’s largest cities, including Columbus, Cincinnati and Cleveland. The downtown areas of those cities also saw much vandalism over the weekend and community clean-ups in the days after.

Ohio Capital Journal staff weren’t able to capture the scene at Broad and High in downtown Columbus Thursday night, when protesters and police initially clashed. For several hours, the intersection was the scene of a tense stand-off. Eventually, police cleared the crowd using tear gas, pepper spray, flash bangs and other tactics. Those tactics and more, including firing rubber bullets into the crowd, would be repeatedly used by police to disperse crowds over the weekend. 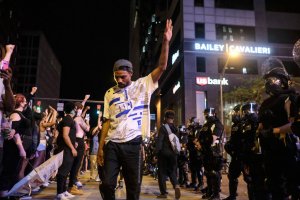 COLUMBUS, OH – MAY 28: Protesters demonstrated in Downtown Columbus near the statehouse in solidarity with nation wide protests against the murder of George Floyd in Minneapolis, Minnesota. Photo by Matthew Hatcher/Getty Images.

Ohio Capital Journal Reporter Tyler Buchanan was on the scene in downtown Columbus Friday night, and live-streamed the situation for nearly four hours.

Mounted patrol and protesters clashing at corner of Front and Long streets. 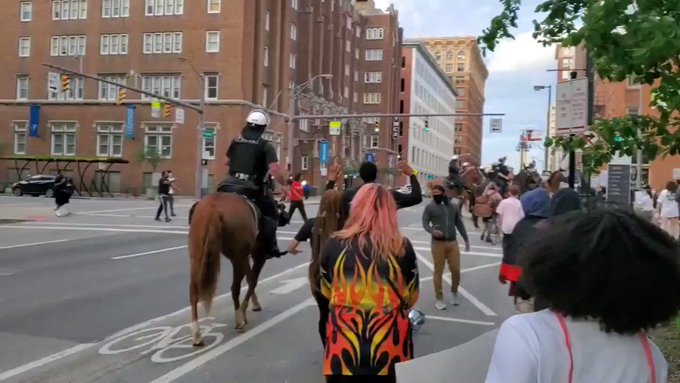