A growing number of black organizations and leaders in Ohio have confirmed they were not invited to participate in a recent conference call hosted by U.S. Sen. Rob Portman about COVID-19 and racial injustice.

At least two political allies of Sen. Portman were, however, invited to join, the Ohio Capital Journal has learned.

The call was held to discuss concerns about how the coronavirus and racism has impacted black communities in Ohio. For days after the June 3 call, Portman’s office declined to name anyone who participated. The office eventually provided three names to the Capital Journal following the publication of a story about the call on Tuesday morning.

OCJ spoke with one of them, former Ohio Senate Minority Leader Eric Kearney, a Democrat who is now president and CEO of the African American Chamber of Commerce of Greater Cincinnati and Northern Kentucky. His perspective was added to Tuesday’s story.

The two other names provided have clear financial and political ties to the senator.

“Senator Portman has worked on many issues impacting our urban communities for years,” spokesperson Emmalee Kalmbach told OCJ on Wednesday. “(Portman) has deep relationships and widespread support from individuals across the political spectrum.”

One is Dr. O’dell Moreno Owens, the president and CEO of Interact For Health, a Cincinnati-based nonprofit. He is a former Democratic county coroner in Hamilton County and also served as health commissioner with the Cincinnati Health Department.

Portman’s office has also touted Owens’ support for legislation sponsored by the senator. In 2013, Owens lent support for the Careers Through Responsive, Efficient, and Effective Retraining Act. At the time, Owens was serving as president of Cincinnati State Technical and Community College.

While president, Owens hired a new director of government and community affairs for the college in 2011. The person hired previously worked as a district director for Portman when he served in the U.S. House of Representatives.

Along with supporting Portman’s campaign, Dr. Owens also donated $10,000 to the DeWine/Husted campaign’s “transition fund” last year right before they took office, records from the Ohio Secretary of State office show. He has donated to some Democratic candidates as well, including state Reps. Catherine Ingram ($1,000 in 2019) and Alicia Reece ($1,000 in 2015).

Kalmbach, the Portman spokesperson, said the senator and Owens have worked together “for many years on fighting addiction and improving educational opportunities.”

The other conference call invitee provided by Portman’s office is Rev. Larry Macon of the Mt. Zion Oakwood Village Church in Cuyahoga County. He has several connections to the Portman for Senate Campaign from his re-election effort in 2016.

Macon publicly endorsed Portman and the campaign website touted his support alongside other “prominent African American religious leaders from across Ohio.”

In 2015, Macon was invited to serve on the Portman for Senate campaign’s African American Leadership Council, an archived press release shows. The group was formed to advise the campaign and serve as surrogates to “spread the word on Senator Portman’s policy initiatives to grow jobs and expand opportunities for all Ohioans.”

“Rob Portman remains one of the single most effective advocates for policies that strengthen families, communities and institutions in Ohio,” the press release quoted Macon as saying. “I recognize and appreciate his work and wish him continued success.”

Portman has shared photos of several visits to Macon’s church over the years. 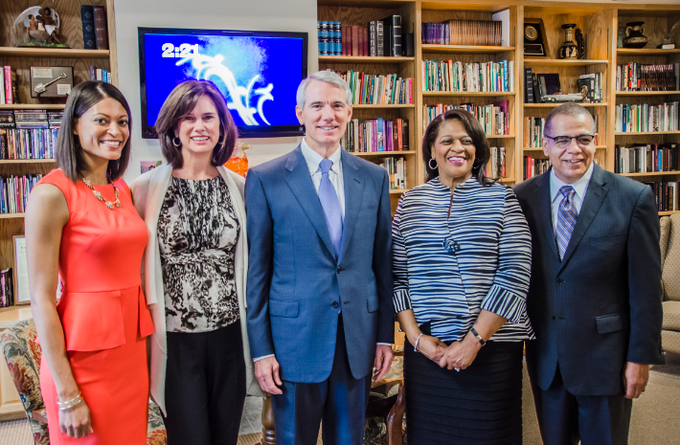 Kalmbach said Macon is “someone that Senator Portman has worked with on issues to advance racial equality for many years.” Examples include criminal justice reform bills and other “efforts to address the disproportionate health outcomes for African Americans.”

Macon was also involved in a separate call with Portman held two days later on June 5. This involved Portman speaking with Surgeon General Jerome Adams and black clergy members of United Pastors in Mission, based in Northeast Ohio. Macon serves as the organization’s president.

To this point, Kearney, Owens and Macon are the only known participants to the June 3 conference call. The senator has said “dozens” were invited to participate.

Meanwhile, a number of other black organizations and leaders have confirmed to the Ohio Capital Journal they were not invited.

Portman has said the call was meant to hear perspectives from black leaders to help inform his legislative work in Washington, D.C. You can read more about the call and what was discussed in our previous story from Tuesday.

EDITOR’S NOTE: Check out View From The Pugh sponsors at Chase Bank, The Manly Man Company and Caribbean Apparel clothing.