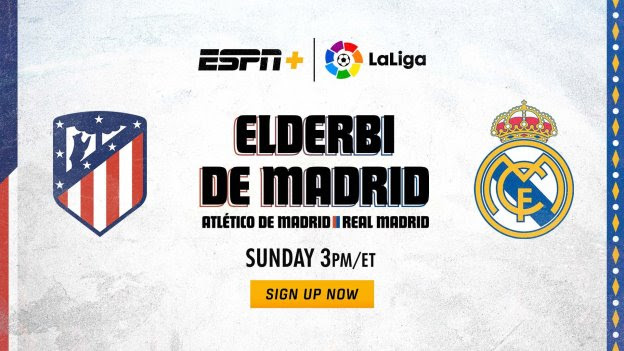 The epic rivalry between Madrid’s top-ranked Real Madrid and No. 4 Atlético de Madrid will stream live on ESPN+ in English and Spanish on Sunday from Estadio Wanda Metropolitano as Diego Simeone and Carlo Ancelotti’s sides face off. On Saturday, Real Madrid won its 10th LaLiga title with a scintillating 4-0 victory over Espanyol and qualified for the Champions League Final after an impressive comeback and 3:1 win over Manchester City in the second semifinals on Wednesday. Atlético de Madrid have yet to defeat their neighbors at their new stadium and would love to finally do so this weekend, especially since the three points are so important in their push for Champions League qualification. The presentation of Atlético de Madrid vs. Real Madrid on ESPN+ will offer fans both the traditional match feed and an alternative multi-camera viewing experience, giving fans the opportunity to enjoy different perspectives and match data through a more personalized offering.

Real Betis vs. FC Barcelona Saturday at 3 p.m. ET Exclusively on ESPN+
Xavi’s No. 2 FC Barcelona travel to Estadio Benito Villamarín, home of No. 5 Real Betis on Saturday. This will be the Verdiblancos’ first home match since winning the Copa del Rey. Coach Manuel Pellegrini urged his players to keep battling for a potential Champions League qualification spot, making this duel with a direct rival for a top four berth so important.